Below is the beginning list of multiples of 83 and the factors of 83 so you can compare:

It's also interesting to note that if a number (x) is a factor of 83, then 83 will also be a multiple of that number (x).

The interesting thing to note here is that if you take any multiple of 83 and divide it by a divisor of 83, you will see that the quotient is an integer. 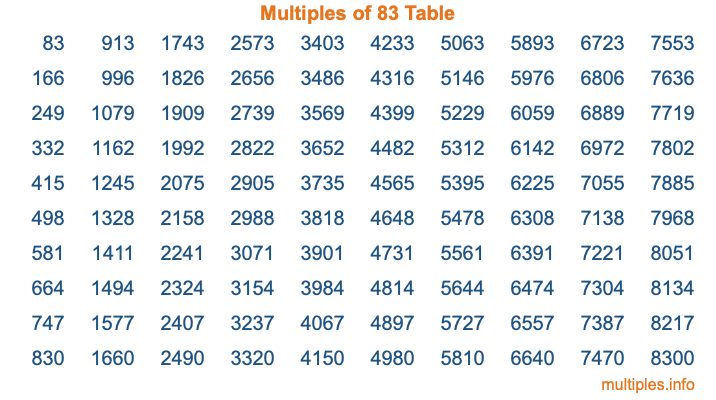 The Multiples of 83 Table is also referred to as the 83 Times Table or Times Table of 83. You are welcome to print out our table for your studies.


Multiples of 83 Summary
Below is a summary of important Multiples of 83 facts that we have discussed on this page. To retain the knowledge on this page, we recommend that you read through the summary and explain to yourself or a study partner why they hold true.

There are an infinite number of multiples of 83.

A multiple of 83 divided by 83 will equal a whole number.

The largest factor of 83 is equal to the first positive multiple of 83.

A multiple of 83 divided by a divisor of 83 equals an integer.

Any integer times 83 will equal a multiple of 83.

Multiples of 84
Did you find our page about multiples of eighty-three educational? Do you want more knowledge? Check out the multiples of the next number on our list!